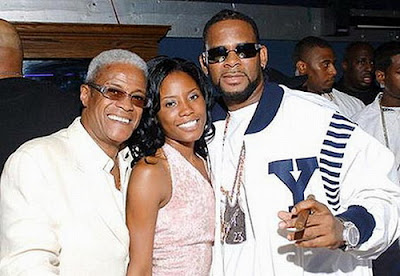 Chicago music retail legend, George Daniels spoke out to Los Angeles radio station KJLH about the real reason why he and his wife, Regina, severed their 15-year ties with R.Kelly. Turns out the rumors were true, Daniels says they felt betrayed and disgusted when they found out that R.Kelly was having a secret affair with their college-age daughter, Maxine, right under their noses. R.Kelly even bought the daughter a car, which was confiscated by her parents. R.Kelly first met the daughter as a small child. (shiver) And George was R.Kelly’s closest advisor/father figure, while his wife served as his publicist.

R.kelly has responded with this statement:
“It’s hard to take seriously the moral outrage expressed by George and Regina Daniels over R. Kelly’s relationship with Mr. Daniels’ adult daughter, Maxine. The fact is that they had no problem with the relationship – indeed, they encouraged it – while Ms. Daniels was on Mr. Kelly’s payroll. It was Regina Daniels, then working as a publicist for Mr. Kelly, who persuaded him to attend her step-daughter’s 21st birthday party. And it was Regina Daniels who shortly thereafter gave her step-daughter Mr. Kelly’s private phone number, with the admonition: “Don’t tell your father.” It was only after Ms. Daniels resigned her position to avoid being fired for incompetence that her step-daughter’s relationship suddenly became an issue for her and her husband.”
George’s description of the affair is really sad, you can tell he and his family were torn apart by the deception……I’m actually pretty surprised how upfront he is about it.

“The reason that I’m talking abut this, it’s not just for me, it’s not for my wife, it’s not for my daughter, but it’s for the public. It’s for other fathers and mothers because it doesn’t have to be a superstar, it could be the dude on the corner. There are guys who sit around and give your child a couple of bucks to go to school and then wait until they get a little older, then they set that trap.”