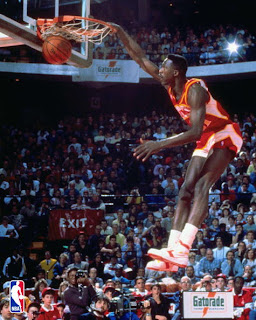 Known best for his dazzling highlights and superb nickname – “The Human Highlight Film” – Dominique Wilkins was a very good all-around player and one of the best scorers of all-time.In his prime, Wilkins averaged close to 30 PPG, grabbed about 7 RPG, and added in a few assists and a couple of steals. He could dunk over anyone, he had a decent jump shot, and he was able to use his athleticism to get to the line.

For his career, he finished at 24.8 PPG, but from age 25-34 Wilkins was consistently in the high 20s/low 30s. Rebounding the ball was not his strong suit, but he did averaged almost 7 a game for his career, topping out at 9.0 in 1991. But when you’re as good as he was offensively, you didn’t need to do a whole lot in other areas to be considered a very good player.

All in all, because of his athleticism, scoring ability, and the fact that he was able to do his part in other areas of the game should lands him as one of the best players ever in the NBA. No, he never got past the conference semifinals, but I find that hard to hold against him since basketball is, after all, a team sport. I feel as if he was never fully in the spotlight due to being around in Magic and early Jordan era, sort of how T Mac was the man before injuries but never was as popular as Kobe.