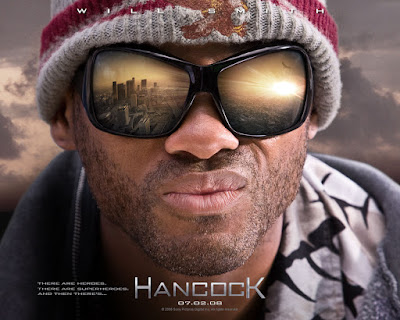 My nigga Will Smith has done it again. The West Philly/Overbrook rapper turned actor best known for numerous summer blockbusters is on pace to take in $100 million during the first week of his latest anti-hero movie, Hancock.

Opening day figures for the film—which has garnered mixed reviews from critics—grossed an estimated $40 million dollars coming into July 4. In addition to another big opener for Smith, he’s gotten other uses out of his Hancock character, and the suit worn in the movie.

“I took the suit home and my wife and I use it sometimes,” he says of the costume. “Just around the house. It’s great.” Hancock strays from the norm by offering up a hero cut from a different cloth than the Superman’s and Batman’s of the comic world.

I watched this movie during the week and well although it wasnt bad it wasnt the best movie I seen in my life. It did have alot of funny scenes though. For those out there that watched this movie, I hope you stayed through the credits to see Mike Epps 1 minute clip with Hancock.