Next American Gangster From Philly 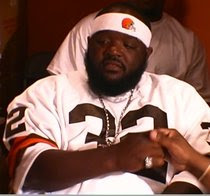 Alton “Ace Capone” Coles, a onetime Southwest Philadelphia rap music mogul, was described by a federal prosecutor yesterday as the CEO of a sophisticated and violent drug gang that spread more than $25 million worth of cocaine across the streets of Philadelphia and into neighboring states and communities.

“He was the leader of a large-scale, multistate drug-trafficking organization,” Assistant U.S. Attorney Michael Bresnick said in opening arguments to a U.S. District Court jury that will decide Coles’ fate.

Coles, 34, and five codefendants are being tried on drug-dealing and related charges stemming from an intensive two-year investigation by the Bureau of Alcohol, Tobacco, Firearms and Explosives.

Bresnick told the jury that Coles and his top lieutenant, Timothy “Tim Gotti” Baukman, used Take Down Records, the rap music company they founded, as a front for a lucrative cocaine distribution network.

Echoing details provided in a 197-count indictment handed up two years ago, Bresnick said the organization was responsible for bringing a ton of cocaine and more than a half-ton of crack into the Philadelphia area between 1998 and 2005.

Defense attorneys, in their openings, contended that the charges were built around less-than-credible cooperating witnesses and a government investigation in which theories, rather than facts, supported the charges.

Coles, who has been held without bail since his arrest in August 2005, was dressed in a blue-gray suit, white shirt and tie, and was wearing a white knit skull cap. He showed little emotion during the trial’s opening. In an interview from prison in November, he denied that he was the drug kingpin authorities allege.

To many in law enforcement, the case epitomizes the culture of drugs, guns and violence that has spawned a wave of street-level violence in Philadelphia and led Mayor Nutter to declare a state of criminal emergency.

Bresnick cited a homicide outside the Philadelphia Zoo in 2002 and a wild shoot-out in Southwest Philadelphia in 2004 as two examples of the violence attached to the drug organization.

He said Coles and Baukman “used guns to protect their drugs, their turf, and the money they made.”

Investigators have alleged that the Coles organization was behind seven murders and 21 other shootings while operating in the drug underworld. But those acts of violence are not contained in the current case.

Coles and Baukman are also charged with heading a criminal enterprise. Each faces a possible life sentence if convicted of the most serious charges.

On trial with Coles and Baukman are James Morris, 33, a reputed cocaine supplier from Salem County, N.J.; Morris’ girlfriend, Thais Thompson, 33; and two other women, Monique Pullins, 24; and Aysa Richardson, 27, who have been described as girlfriends of Coles’.

During a series of raids in August 2005 when the ATF wrapped up its investigation, authorities confiscated more than $800,000 in cash and 31 weapons.

The biggest monetary haul that morning was in a modest home in Quinton, N.J., where Morris was living with Thompson.

Authorities found $559,396 in cash hidden throughout the home in shopping bags, suitcases, duffle bags, dresser drawers and, Bresnick said, “hidden behind insulation in the rafters of the attic.”

In an apartment in Lansdowne that authorities described as a stash house for guns and weapons, authorities found two rifles, a shotgun, seven handguns, more than 500 rounds of ammunition, and a heavy-duty hydraulic press typically used to form cocaine powder into kilogram “bricks.”

The trial is expected to last about eight weeks and will include testimony from several cooperating witnesses, including a third girlfriend of Coles’. The jury will also hear hundreds of secretly recorded wiretapped conversations in which Coles and his top associates allegedly discuss and set up drug deals.