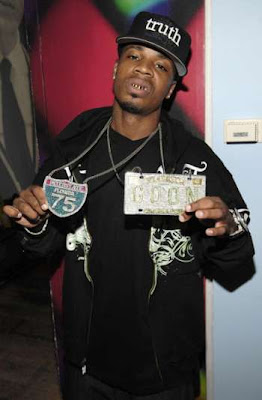 It’s been less than a year since his debut album dropped but Plies is already planning to release his sophomore album this June. In this SOHH exclusive, the Florida born rapper talks about his new album, Definition of Real, his upcoming reality show and his new clothing line.

As SOHH previously reported, Plies is preparing to release his sophomore album, on June 10th, just ten months after dropping his debut.

“To be able to turn around two albums in a ten month frame, first and foremost I do understand how much of a blessing it is to have such success on The Real Testament,” he says. “To have a certified gold album in this climate definitely speaks volumes.”

Plies is planning to repeat the success of his first album by following the same format of keeping costs down.

“I always like to keep my overhead low,” he says “I don’t want to be in a situation where I’m spending $2 million on a project”. Instead of paying high prices for beats from big name producers, Plies prefers to rely on production from his brother’s company, The World Music Group.

“We got a lot of good producers under our umbrella,” he says. “At the end of the day if you’re not careful you can go through this business coming out with great records, great albums and walk away with nothing to show. So, I’m just trying to tighten up my business side of it.”

Plies also decided to go easy on the guest appearances. He didn’t have any other rappers on his first album and he won’t have any on this one. “I kept it simple,” he says. “It’s all me on this album but I was able to work with a Ne-Yo who gave me that good radio side, that radio look”.

The Florida rapper understands the importance of a strong, radio friendly first single. On his first album, he found success with the T-Pain laced, “Shawty,” which topped the US hip-hop charts and sold over one million ringtones.

In addition to his sophomore album, Plies has a female clothing line and a reality dating show in the works based on his two-part single, entitled “Bust It Baby”. “The definition of a ‘Bust It Baby’ for me is the best female sexual experience,” he explains

The footage of his “Bust It Baby” casting call racked up over 200,000 plays on YouTube and has sparked a bidding war between three major television networks. His “Bust It Baby” clothing line is 95% done and is comprised of “sexy” items like short shorts and spandex.

On a side note Plies had the typical or shall I say ideal start of a career. He had the T-Pain radio single, then the Akon radio single, both which were radio smashes because they catered to the females and the airwaves yet he the hoodiest of hood. And he got like 4 or 5 videos out. I mean if I was a rapper my first two singles would have T-Pain and Akon on them so that I could sell and make a name for myself. Then everything after that people will listen to me just because. Shit his first single has Ne-Yo, which is also a 2 part song and has its own clothing line and tv show coming out. The bull Plies is definitely on his grind.

CBD Infused Drinks – A New Way to Relax and RejuvenateThere are so many creative ways of getting your daily dose of CBD these days,... Get Your Tickets Now To INFJ Kenzo’s Listening Party Performance at Club BahiaJamal Hansen, professionally known as INFJ Kenzo, hails from Santa Monica, California. After performing CPR... Travel Influencer and Entrepreneur Ravi Rajapaksha is on a Mission to Take Your Brands to New HeightsRavi Rajapaksha is simply a gifted entrepreneur, travel influencer, public relations expert, and businessman who... Lil Baby and AXE Debut New Animated Mini-SeriesAXE® premieres a series of animated digital vignettes starring award-winning artist, Lil Baby. Featuring three episodes in... 5Star Dynasty Visions Partnering With YourAdamSocial.comBuilding companies is a journey of falling down seven times but getting up eight. Ultimately,... Swizz Beatz and Timbaland Reach Settlement Agreement with Triller over VERZUZ AcquisitionSwizz Beatz, Timbaland, and Triller today announced the settlement of their legal dispute over the... White Castle Inducts Hip-Hop Icon and Slider Aficionado Fat Joe Into the Cravers Hall of FameWhite Castle, the family-owned fast-food hamburger chain and popular consumer-packaged goods business, welcomes hip-hop icon,...
Ronyea Parker is taking his talent to the next levelHas R&B welcomed a new Afro Latino style? Born in raised in San Bernardino, CA... Cootie Drops “2Tone” Featuring YoungBoy Never Broke AgainWith a booming bass voice that adds gravitas to every trap tale, rising rapper Cootie is putting... Rolling Loud New York 2022 Day 3 Highlights From the Fashion Nova StageA$AP Rocky performs at the Fashion Nova Stage at Rolling Loud New York 2022 at Citi... Gucci Gordy, Detroit Native takes the Music Industry to new levelsQ. Who is Gucci Gordy? Gucci Gordy is the mmelinum version of Barry Gordy of... Mike T Introduces His Latest “4 Pack” EPBorn and raised in Northern Virginia, 24-year-old Michael Thompson is putting on for the DMV... St. Louis Rapper Don Killam Knows Exactly What It’s Like To Be HatedSt. Louis, Missouri is a different city. Especially when it comes to hip hop. Rapper... Super producer and musician, Sunny Laurent, scored 2 billboard plaques back-to-back and goes #1Observing Sunny Laurent and his background, he has an extensive catalog of music and accolades....
SleazyWorld Go’s “Sleazy Flow” Featuring Lil Baby Jumps To #1 On Urban RadioHip-hop’s 2022 breakout star SleazyWorld Go continues a momentous year  with his first-ever #1 at Urban Radio.... DC The Don Aims For the Head in “ZOMBIELAND”Animated by his fearless creative vision, DC The Don creates music that fearlessly balances forces of good... Poducer Performance: Te JulyThe purpose of this new series is to curate an intimate experience with different musical... YG RELEASES NEW TRACK AND VIDEO “MANIAC” FEATURING HIT-BOYMulti-platinum West Coast legend and superstar rapper YG, who surpassed the prestigious 12 billion career... RILEYY LANEZ SHARES NEW TRACK “ONE OF THEM NIGHTS”Rising R&B singer/songwriter Rileyy Lanez has shared her latest single “One of Them Nights” via... LIL NAS X UNVEILS NEW SINGLE “STAR WALKIN’ (LEAGUE OF LEGENDS WORLDS ANTHEM)” ALONGSIDE OFFICIAL ANIMATED MUSIC VIDEOFresh off back-to-back sold out shows at NYC’s Radio City Music Hall, multiplatinum recording artist... MoneySign Suede Enlists Ty Dolla $ign, Remble, and More For ‘Parkside Baby’ MixtapeEmerging West Coast rapper MoneySign Suede releases his new mixtape Parkside Baby – available now via The Machine Works/Atlantic....
Multi-Platinum Emmy Award Winning Producer Bud’da Talks ‘BMF’ on StarzIn this exclusive interview with HipHopSince1987 multi-platinum producer, Bud’da chatted about composing music for the... Super producer and musician, Sunny Laurent, scored 2 billboard plaques back-to-back and goes #1Observing Sunny Laurent and his background, he has an extensive catalog of music and accolades.... Everything You Should Know About the Musician J BertJ Bert is a French/American rapper, musician, and internet personality.In 2022, his song debuts in... Akil Wade – Manifesting Mantra is out Now!Akil Wade is a poet, author, musician, and business owner. Inspired by eastern philosophy and... Digital Dior is in the music business to stayDigital Dior is a full-service independent record label with subsidiaries in producer and artist management,... By Reinventing the Classroom, Mr. Ellis The Teacher is Reinventing the Music IndustryMr. Ellis The Teacher is an up-and-coming musical act who is combining his passions for... Andez Santana drops his new single “Everybody”Digital Dior signee, Andez Santana, teams up with platinum producer, KXVI and engineer Yung Gosse...