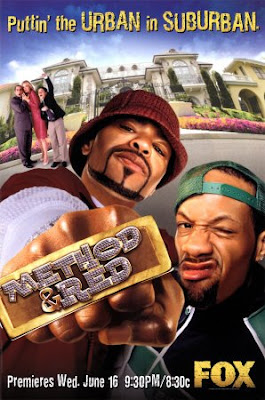 Method Man and Redman are back in the studio together after nearly 10 years, recording a new collabo project Blackout 2, which will be the follow-up to the duo’s platinum selling disc Blackout!

The two rappers’ chemistry has already scored them co-starring roles in the flick How High an endorsement deal for Right Guard deodorant and their own short-lived Fox sitcom, “Method & Red”. Its crazy because I remember watching the show because Redman had a Rocawear sweatsuit that had.

“A lot of good music comin’ out this year,” Redman told sitdownstandup.com. “You’re especially gonna hear from us, finally”. The album features production by Gilla House, E-Sermon and Rocwilder and there may even be a DJ Premier track or two before recording wraps.

In addition to Meth and Red’s collabo, the two are sharing a mic with almost 70 other emcees for a 2008 regeneration of KRS-One’s new Stop the Violence Movement.

Along with Meth and Red, David Banner, Chamillionaire, Nelly, Busta, and Ne-Yo are among the artists putting a new spin on the 1989 inspirational rap song “Self Destruction” called “Self Construction.”

“Anything positive is always good for the hip-hop community,” Redman said. “I remember when the first ‘Self Destruction’ came out, that sh*t was hot. I wasn’t in the game to get on it but now I’m in the game, so why not be a part of history?”

Blackout 2 is expected to hit shelves this summer and Muddy Waters 2 will drop at the top of ’09.