This pic is drawlin, it looks like he just been raped No Homo! 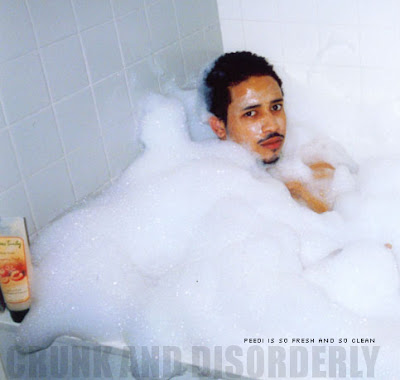 Why aren’t you mad at Jay-Z now?

Because at the time when I was upset about it, it was when he had me under the impression that he had my back. So I felt kind of betrayed. I felt as though he was saying, “Fuck me.” But now it’s to the point where I’m over it now. I’m over it now and I gotta move on. So I’m not upset no more. At the end of the day, I’m still Peedi Crakk. It don’t take nothing away from me.

It was just an opportunity for me at the time to move my career further because everybody’s waiting for the P. Crakk album and it would definitely be one of my biggest moves to have an album available in stores internationally. That would definitely take my career to the next level and Hov had the ability to do that for me and he was ignoring me and that had me heated.

Now he left Def Jam and whatever the case may be, I have to keep it moving. I realize that my career doesn’t revolve around Rocafella and Def Jam and Jay-Z. Peedi Crakk is Peedi Crakk. When you think of Peedi Crakk, you don’t say, “Oh yeah, the kid from Rocafella.” No, you say, “It’s just Peedi Crakk now.” I got my own identity. It don’t bother me. If I really needed Rocafella or Def Jam to be successful, I would be upset because I would feel like I lost out. But I’m still hot as shit. I’m still hot. And the fans, I don’t know why, but the fans, they still love me.

Why did your album get shelved at Def Jam?

I think more personally, Jay didn’t favor putting my album out personally because of some personal differences between me and him. I did an interview awhile back and they asked me a few questions about Jay. I’m not sure who I did it with. The interview was well-heard. It didn’t go unheard. A lot of people read it and I got a lot of calls. It stirred up a lot of shit. When I did the interview, they asked me about Jay being the president up at Def Jam and I told them that I appreciated him more as an artist. They asked me to elaborate and I told them the reason why I appreciated him as an artist was because I felt he was at his best as Jay-Z. As Shawn Carter, the president of Def Jam, we didn’t see him doing what we expected to see him do. I’m not speaking just about me. He wasn’t the boss that we all expected him to be up there.

I expressed that in the interview and he got offended by that. He called me and he asked me why I was saying those things about him. I wasn’t saying it in an offensive way. It was just my opinion. He was telling me that these people were just using me for information and that I should just keep my mouth shit. I think I pressed a button. I think I offended him. I think I said he had too much going on in his life and he couldn’t focus on running a company of that magnitude and I think he felt that I was discrediting him. I wasn’t. It was just my opinion at the time and I’m always going to voice my opinion. But I believe that’s what kind of altered our relationship. We used to be real cool. I used to be able to call him and ask him for advice on shit and he would call me. But after he called me about that interview, I never talked to him again and he wouldn’t receive none of my calls no more. He never called me again. I never heard nothing from nobody at Def Jam again. I believe that’s why the album at Def Jam didn’t drop.

Do you think Jay is really that sensitive?

I think he felt a little betrayed, kind of. But he don’t understand that that wasn’t my intentions to be this back-biting person to talk bad about him in an interview. It’s just that was just what was going on in my life. Even talking to you now, I’m not going to bite my tongue. He could fuck my career up even more. They don’t want to let me out of my contract. They don’t want to drop the album but they don’t want to let me go neither. So I know by saying this shit now he could do it but I don’t give a fuck. It’s not beneficial for me to keep my mouth shut. If we were doing good up there, I would zip it and shut the fuck up. But we’re not doing good up at Def Jam. It’s not beneficial for me to shut up. So why not air my opinion out? I would rather air it out now than regret not saying anything.

He talks more about Def Jam, his album, roots, State Property and beef with Jay-Z