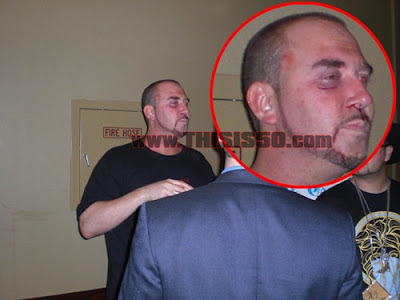 According to the suit, Vlad received a text message from Ross on the afternoon of the Ozone Awards that read, “N—– will learn … trillaaaa.” Vlad had interviewed Ross twice before, which is allegedly how the MC obtained Vlad’s phone number. After the DJ inquired about who the text was from, Ross allegedly responded, “Ross … I’m hearing things.”

A short time later, according to the suit, Ross called Vlad and said, “I’ve been hearing things about me on your Web site. … We gonna make a story. … We going to see each other. … We going to talk. … Where are you?” Upon learning that both men were in town for the Ozone Awards, Ross allegedly set up a time for the meeting on the second floor of the Hilton Hotel in Houston and arrived accompanied by four other people.

“Following a brief conversation between DJ Vlad and Ross in which Ross said, ‘We got beef,’ Ross’ accomplices, who had surrounded DJ Vlad while he spoke with Ross, proceeded to strike and beat DJ Vlad in Ross’ presence and without any protest on Ross’ part,” the suit says. The men then reportedly fled the scene and left Vlad laying on the ground “bleeding profusely” after one attacker shouted, “Yeah, mother—-er, that’s what you get.”