On Friday June 30th during the 2017 Essence Festival Events, HHS1987’s Terrell Thomas was on the scene at the Netflix “NAKED” Red Carpet to speak with the cast of the film. Netflix’s film ‘NAKED” Dave Chappelle Will Be Raking In $60 Million For His Upcoming Netflix Specials!

After making his long-awaited comeback hosting  SNL, Dave Chappelle is officially here to stay. The other day, Chappelle announced he would be appearing in not one, not two, but three Netflix specials coming soon. Timberlake and chill? Apparently so. Justin Timberlake and The Tennessee Kids are coming to Netflix in a new film that gives a behind-the-scenes look at Timberlake’s final night of his “20/20 Experience World Tour.” 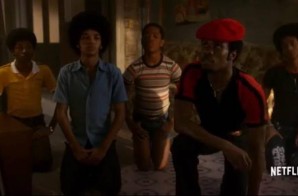 Following the release of VH1’s Hip-Hop documentary, The Breaks it looks like mainstream media is looking to further showcase the origins of the culture with Netflix releasing it’s own original series titled, The Get Down. Netflix will be bringing us a documentary about Nina Simone. For What Happened, Miss Simone?, Lauryn Hill paid tribute to Nina as part of the project. Ms. Hill recorded six sounds for the film Netflix continues to build more buzz for their forthcoming season of Orange Is The New Black with the release of a new trailer. During the trailer fans go on a brief trip down memory Fans have been eagerly awaiting the for the release of the third season of Orange Is The New Black. The Netflix original will be making it’s return to the streaming site on June 12. Chris Tucker Teams With Netflix For First Ever Stand Up Special

After having successful exclusive deals with other comics like Chelsea Handler and Aziz Ansari, Netflix has reached a deal with Chris Tucker to produce his upcoming debut full length special. “Chris Tucker Live”