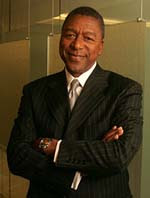 “And to me, as an African-American, I am frankly insulted that the Obama campaign would imply that we are so stupid that we would think Hillary and Bill Clinton, who have been deeply and emotionally involved in black issues since Barack Obama was doing something in the neighborhood –­ and I won’t say what he was doing, but he said it in the book –­ when they have been involved.”

Bob Johnson explained what Hillary meant with her Dr. Martin Luther King comment and had an ambiguous message for Obama. Some people think he is refering to Barack’s pass drug usage when he mentions, “and I won’t say what he was doing, but he said it in the book”.

I am just happy we have a black candidate as well as a female Presidential candidate.