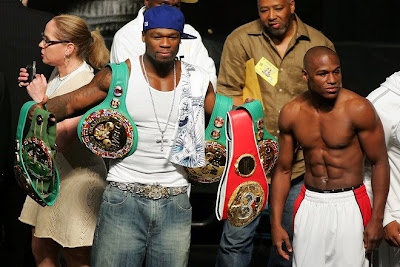 50 Cent was recently interviewed by ESPN.com about his latest video game, Blood On The Sand. The G-Unit head honcho spoke about whether or not there was any truth to rumors that he and professional boxer Floyd Mayweather got into a fight.

“Yeah, we got into a little scrap, a little boxing match,” said 50. “Well, it wasn’t really much of a boxing match because he hit me in the back of my ear. He’s so fast, he’s just so fast. The thing about it is, everyone who is around him works for him. And for a second, he tried to talk to me like I was one of the people working for him. He tried to tell me what to do so I grabbed him. I snatched his little ass up then he hit me and was like ‘What’s wrong with you?’ We were mad for a second, but then everything went back to normal.”

50 continued, explaining the source of the scuffle. “He was going to do the match in WWE at Wrestlemania and he started telling everyone that I was going to be there. So everyone got all excited and started asking me if I was going to come, and I was like, ‘If you’re really getting $20 million for this, then give me some money.’ He was sitting there with a million dollars cash in a bag, and he kept telling me he was going to get me money for appearing, but I was like ‘No, give me some of that money right there.’ He had one million dollars in the bag, it was physically right in front of me, so why should I have to wait to get paid? Just give me that money right there. He wasn’t with it, and that’s how it all started.”

The rapper claims that he and Mayweather were “cool right after it happened.” 50’s history with the boxer is well-documented, as he bet $1 million on Mayweather in his boxing match against Oscar De La Hoya, and has remained friends with him since, even accompanying him to an appearance at Wrestlemania.