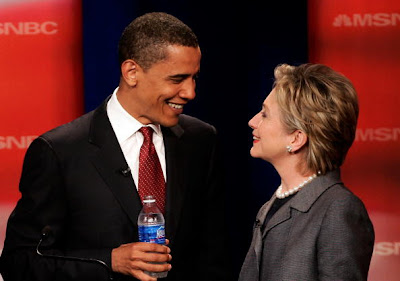 With the race for the Democratic presidential nomination heating up, Barack Obama shot down any hope of a “dream ticket”, featuring himself as Hillary Clinton’s Vice President.

Last week, Sen. Clinton suggested that she’d be interested in running with Obama—with her on top of the ticket—and former President Bill Clinton told a Mississippi audience that a Clinton/Obama ticket would be “unstoppable.”

Obama, who currently leads the delegate and popular vote count, is having none of that.

The Illinois senator, who’s been accused of not having enough fight in him didn’t stop there.

Obama credited Clinton for running a hard campaign, but reiterated that he was not running for Vice President of the United States.

For those hoping for an Obama/Clinton ticket in November, don’t count on that either.

“I don’t want anybody here thinking that somehow ‘maybe I can get both,’ don’t think that way, you have to make a choice this election. Are you going to go along with the past or are you going to go towards the future?…I do not believe Sen. Clinton is about change, because in fact, this kind of gamesmanship—talking about me as Vice President, but maybe he’s not ready to be Commander-in-Chief—that’s exactly the kind of double speak, double talk that Washington is very good at, that people who spend a long of time in Washington have a lot of experience at, but is not going to solve the problems of the country,” he said to applause.

“Have I been clear? I want to make sure I’m clear to everybody.”

The contest between Obama and Clinton is not expected to be decided until this summer’s Democratic national convention in Denver.