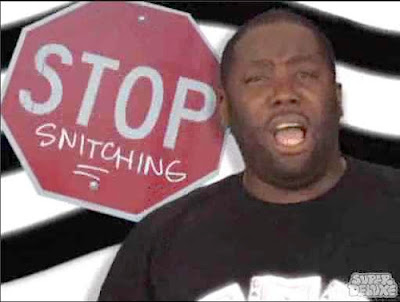 From Rhapsody’s Rhap Session with Mike:

On credibility in hip-hop and Rick Ross’ alleged past career as a prison guard
I’m not speaking relative to or in opposition of Rick Ross in this next statement, but I will say this: my father was an Atlanta police officer and my mother was a known drug trafficker, in addition to being a business owner and pretty smart, savvy black woman. And I’ve never hid either of those facts. I’m a man and I am contradictory elements to my past and my personality. I’m the same kid that sold dope on Martin Luther King [Drive], paid for a tutor with that dope money, and got himself into Morehouse College because he knew Martin Luther King Jr. went there. My story is the American story. It’s Joe Kennedy. A grandfather who ran moonshine so his children could be better educated. My mother did what she did so her child could have a better life. I’m from that, and that’s what I wanna present in all it’s beauty. I’ve always told my story in that way because I have integrity. I can’t answer in terms of why other rappers do it; I’m just gonna say I don’t lie to my audience. I just think the true stories, the ones with all of our complexities, make better movies and songs. I would’ve loved to hear a Port of Miami where a guy gets fired from his job as a C.O. and goes on to some dirt. But for everybody who’s judging him now, understand that his next album is called Deeper Than Rap. We are politicians; he can spin this into something bigger. Now that the truth is told, what good is gonna come out of the truth?

NBA 2K21: Should You Buy It?The latest annual NBA video game is scheduled for release on September 4 th .... Def Jam Forward Presents “Black & Blue:” A Conversation on Police Brutality on 9/29!Def Jam Forward presents “Black & Blue,” a conversation on police brutality moderated by NYC... Check Out King Ice’s Top 7 Under $50!King Ice, the LA-based streetwear jewelry giant is on a roll as the year closes... Dr. Dre’s Daughter Puts 50 Cent On Blast!50 Cent has taken his trolling too far.  And Dr. Dre’s daughter, Truly Young, has... Tory Lanez Addresses Megan Thee Stallion Shooting On “Daystar” (Album)Finally.  Tory Lanez breaks his silence since the shooting incident involving Megan Thee Stallion back... Big Sean Reveals His Top 5 Rappers!Always interesting to see who rappers have on their “Top 5” list. The latest to... Bow Wow Welcomes Son!Congrats!  Bow Wow welcomed a healthy baby boy earlier this morning with IG model, Olivia...
Mary J. Blige To Re-Release “My Life” (Special Edition) on 11/20!The living Queen of Hip Hop Soul legend, herself, Mary J. Blige, is re-releasing her... MICHAEL JORDAN & DENNY HAMLINSTARTING A NEW NASCAR TEAMAir Jordan is set to become Rev Jordan, as Michael is partnering up with a... CARDI B & SISTER SUED FOR DEFAMATION OVER’RACIST MAGA SUPPORTERS’ JABAfter calling a group of beachgoers "racist MAGA supporters," Cardi B and her sister are... SAINT BODHI RELEASES ACOUSTIC VISUAL FOR HER LATESTAfter her critically acclaimed single “Flowerchild,” Saint Bodhi is back with “Gold Revolver,” which is... ROCKWELZ UNCONVENTIONAL LEADER IN MILLENNIAL HIP-HOPThe Bronx hip hop scene emerged in the mid-1970s from neighborhood block parties thrown by... Da Kid K – From Me To You (Album) via Sony/The OrchardAtlanta-based rapper, Da Kid K, releases his second official project of 2020 already, titled “From... Yungeen Ace Drops New Single, “Withdraw From Life”Reaching out with the latest from Yungeen Ace, who just dropped a surprise release new track,...
Mary J. Blige To Re-Release “My Life” (Special Edition) on 11/20!The living Queen of Hip Hop Soul legend, herself, Mary J. Blige, is re-releasing her... Jaah SLT Releases 2nd Project of 2020 and New Video20-year-old Charlotte, NC native, JaahSLT, is in the midst of his break out year.  After going viral... Swae Lee Wants You To “Dance Like No One’s Watching” (Video)“Dance Like No One’s Watching” is the lead single from Swae Lee’s upcoming album, “Human... Tony E Takes On Pride, Mental Health & Hector Camacho on “La Tienda” (EP)Bringing a sobering balance of strength and vulnerability is NY’s, Tony Echandy (Tony E.), who... Blac Youngsta & Pap Chanel Deliver “2 Way Street” Visual!Rising Milledgeville GA rapper/singer/songwriter, Jaida Chanel Roby, known by her artist moniker, Pap Chanel, is... Travis Scott – Franchise Ft. M.I.A & Young Thug (Video)Travis Scott secured a rare M.I.A. feature (she’s literally been mia, herself, for a minute)... 19-Year-Old Viral Sensation, Tizzy Stackz, Links w/ Dancehall Legend, Busy Signal on “Man Now”Tizzy Stackz is the man now. The Toronto native is just 19 years old and...
Jon HP Exclusive Interview On HipHopSince1987Jon Hp born in Puerto Rico, moved to Huntingpark area in Philadelphia got his start... BLXST CREATES A CINEMATIC MILLENNIAL LOVE TALE ILLUMINATED BY A HUSTLER’S REALITY WITH ‘BE ALONE’Major Recording Artist' Blxst' is the new age Millennial author for every Millennial attempting to... Y Sit GetteUp – “Gette’N Knights”Y Sit GetteUp is one of a few Texas rappers, in this new wave, to... BIG BOSS MULAA UNVEILS HIS MILLENNIAL TWISTED DARK FANTASY WITH BIG BOSS WORLDDDBig Boss is nothing close to normal in the world of Hip-Hop. Everything from... Young Reela – “Broward County” Out NowYoung Reela hailing out of Broward County, Florida as told on his debut LP, which... Travis Scott Bodies Collab With Big Sean “Lithuania” (Offcial Music Video)Recent Album Release Detroit 2 Highly anticipated and accepted upon release has a host of... Is Jay Electronicas “A Written Testimoney” The Most Underrated Album of The Year, Despite Heavy Jay Z Influence?MARCH 13th 2020, Jay Electronica gave us the long awaited release of his album “A...