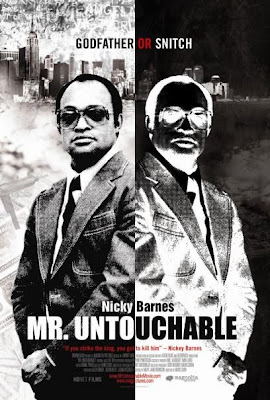 Hip hop entrepreneur Damon Dash says he has identified with Leroy “Nicky” Barnes since the 1970s–when he was a kid in Harlem, where Barnes’ crime syndicate ran the drug trade. Barnes is the central character in filmmaker Marc Levin’s new documentary, Mr. Untouchable–the moniker given to Barnes by the New York Times Magazine, when it ran a cover story on the gangster.

Back then, we all wanted to be Nicky Barnes,” says Dash, who is one of the producers of Mr. Untouchable. “He was the king of style and swagger, and he was a great businessman. Drugs was just another business in Harlem–that’s the way it was. A fact of life. But when Nicky ratted out his partners, he broke the code. Everything changed–there was no organization, the streets was wild.”

Dash attributes the origins of gangsta rap and hip hop style–the basis of his very successful Damon Dash Enterprises–to Barnes’ influence. “E’rybody still wanted to be Nicky–the godfather–running our businesses the way he did. And we wanted his swagger,” says Dash. “Harlem sets style for the world–in Tokyo and Paris, everywhere, e’ryone follows Harlem’s style.”

No doubt Nicky Barnes is part of Harlem’s History, as Dash points out. But he was a heinous criminal who dealt drugs, murdered rivals, hooked and killed his clients. So, does Mr. Untouchable deserve the career replay he’s now getting? While documentary films can cover any and every subject, and this film’s insider glimpse at Harlem’s underworld is quite fascinating, it would be a shame if youngsters who’re now the age Dash was when he was so influenced by Barnes were to assume an attitude of reverence towards Harlem’s notorious gangster. Mr Untouchable doesn’t exactly glorify Barnes, but it doesn’t quite comdemn him either.

The DVD releases today so go to your local best buy or blockbuster and get it.

Grammy® Award Winning Global Icon Brandy Inks Partnership With Motown RecordsPhotographer— Munachi Osegbu / @munachiosegbu   Making major moves to kick off the summer, GRAMMY® Award-winning... Motown and COLORS Announce Exclusive Performances and Content Series to Celebrate Black Music MonthMotown Records and COLORSxSTUDIOS proudly present a first-of-its-kind performance and content series in honor of Black Music Month.... Killer Mike and Shay Bigga featured in Cadillac’s Escalade-V Series CommercialIn honor of #BlackMusicMonth, Cadillac proudly celebrates the power of Black Music, Black Art, and... Cordae Does TED Talk on How a “Hi Level” Mindset Helps You Realize Your PotentialWhat does it take to build a legacy? Hip-hop artist Cordae tells how he went... Come Home with SupaMojoIt all begins at home… Supa Mojo Takes Us Home Hailing from small town Alor... Red Bull Batalla is Back With Announcement of USA Competitors and Schedule2021 Red Bull Batalla USA Final Champion, Reverse, and USA Top 16 Finalist, Cuban  Credit:... Future Format of Music: How Artists are Getting Creative with New Technolgy “Moodelizer”Music formats have been pretty stagnant for a few decades. You’ve got MP3, FLAC, and...
DJ and Recording Artist Boyd Hoek Aims To Connect With Fans On Upcoming Project  BoydHoek, a well-known DJ and Recording artist, has been using his music to aid... Maybach Stank – “Ace Boogy” (Official Video)Oakland’s own Maybach Stank, also known as Pierre Rushing, may be behind the wall right... DSwervo – “Me & Mine” (Official Video)The tragedy of Uvalde, Texas was one of the most horrific events in U.S. history... Rapper $BillyFence$ talks new single “Love Like This” and Black Music MonthThe DA PR Firm announces the release of South Florida- based rapper, producer, and songwriter... The repetitive state of music is no more with Skyler Simpson’s new track “Lover”Skyler Simpson Being an Instagram influencer is a kind of artistic expression. It is the... Kerri Cassedy’s new single “Flight” brings everyone backKerri Cassedy has already given us a diverse collection of tunes. Her new song “Flight”... Music video by Curren$y for “Too Late”The rapper Curren$y launched his first Spring Cleaning campaign last year, and earlier this month,...
Dot da Genius shares “Talk About Me” Video with Kid Cudi, Denzel Curry, and JIDMulti-platinum, Grammy-nominated producer Dot da Genius has just shared his new single “Talk About Me” (feat. Kid Cudi,... Big Moochie Grape Drops “Acting Up” VideoRising in the South on the back of his “gigantic” personality, Big Moochie Grape‘s charisma can’t... JESSIE REYEZ SHARES BRAND NEW SINGLE “FRAUD”Grammy-nominated Colombian by way of Toronto, singer-songwriter Jessie Reyez shares her first solo single in two... JIM JONES MAKES IT A BYRDGANG SUMMER WITH THE NEXT RELEASE ON BYRDGANG 2.0 “Go Girl”It’s about to be a ByrdGang Summer! Jim Jones and ByrdGang 2.0 members Dyce Payso & Keen Streetz are starting things off with... Ne-Yo Drops Video For “You Got the Body”The summer just got a whole lot hotter. Three-time GRAMMY® Award-winning R&B hitmaker, iconic songwriter,... LIL NAS X AND YOUNGBOY NEVER BROKE AGAIN UNITE FOR “LATE TO DA PARTY”After weeks of teasing and online chatter, multi-platinum award-winning superstar Lil Nas X and rapper... Rick Hyde Drops Official Video for MS. YOUNG’SRick Hyde – MS. YOUNG’S [Official Video] Directed by Zach Warren Films & Phresh STIMA...
The Cambodian HerculesMeet VIN VITOU, a KlapYaHandz artist from Cambodia who will be featured on our Week... HDBeenDope Exclusive Interview with HipHopSince1987HDBEENDOPE is an incredible artist and producer with a strong catalog and resume who has... Blood Moon Rising 🌒DAOrecords & Nusantara Records gear up to release Blufyah’s new single “Blood Moon”, a song... 64’s New EP “Verified” Explains What Being Verified Actually Means✅It’s no secret that 64 Boy, or Gregory Craig Brown Jr. as he is more... 24k A.Stall all set to release his latest new single ‘Run It Back’!  Aaron Stallings, better known by his stage name 24k A.Stall, is an American hip... Salma Slims Is Applying Pressure In New “Oh He Wanna” VisualIt is such a good time to be a female rapper. As the female emcees... J.T. Hiskey & Afroman Announce Brand New Single “Beverly Hillz”  Distinct sounding artist who has been a rising talent coming from Salt Lake City,...