Here are some photos of the revamped Apple Newton, which also resembles the iPhone. It features a slim clamshell design with dual multi-touch displays and a camera. 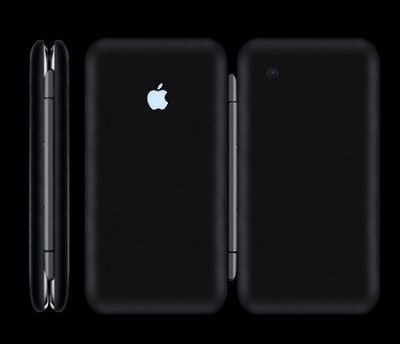 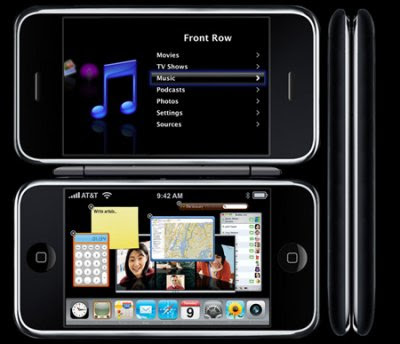 Apple Inc, which helped spawn the PDA market with its Newton MessagePad line in the early ’90s, plans to give the concept another go with a modern day reincarnation of the old fan favorite based on the company’s new mutli-touch technology, AppleInsider has learned.

With the initial iPhone now out the door and two successive models well underway in Apple’s labs, it’s believed to be full steam ahead for the modern day Newton project. Like iPhone and the iPod touch, the new device runs an embedded version of Apple’s Mac OS X Leopard operating system.

Externally, the mutil-touch PDA has been described by sources as an ultra-thin “slate” akin to the iPhone, about 1.5 times the size and sporting an approximate 720×480 high-resolution display that comprises almost the entire surface of the unit. The device is further believed to leverage multi-touch concepts which have yet to gain widespread adoption in Apple’s existing multi-touch products — the iPhone and iPod touch — like drag-and-drop and copy-and-paste.

More broadly characterized as Apple’s answer to the ultra-mobile PC, the next-gen device is believed to be tracking for a release sometime in the first half of 2008. Assuming the project remains clear of roadblocks, sources believe it could make an inaugural appearance during Jobs’ Macworld keynote in January alongside some new Mac offerings. Still, manufacturing ramp and availability would seem unlikely until closer to mid-year, those same sources say.

HHS87 Spotlight Saturday: Cico P has a New Project On The WayPeaking at #91 on Billboard’s Hot 100, “Tampa” was originally released in 2019 but began its swift climb... Upcoming Dover, DE Artist Keith Tha Singer Releases Single “Drowning” ft. M.T.AMusic is known for creating a slew of talent up and down the east coast.... Mike Mayjor Shares New Single and Visual”Look Into My Eyes”Right in time for the summer, Mike Mayjor gifts his audience with the new release... REFORM Alliance co-chairs Meek Mill and Michael Rubin Join Governor Ralph Northam in Virginia For HB 2038 Bill SigningToday, REFORM Alliance co-chairs recording artist Meek Mill, Philadelphia 76ers partner and Fanatics executive chairman... BET ANNOUNCES OFFICIAL NOMINATIONS FOR THE “BET AWARDS” 2021THE “BET AWARDS” 2021 WILL AIR LIVE FROM MICROSOFT THEATER AT L.A. LIVE ON SUNDAY,... C.LACY’s Latest Single “PyP” is making waves in the industryThe music industry rewards new talent, and only a select few artists can take a... Putting on a Show: A Guide to Finding a Performance SpaceWhether you’re in a band playing “dad rock” or looking to put on a theater...
JoeVille Ft. KenTheMan – It’s Whatever (Video)JoeVille returns with the official visual for the KenTheMan assisted single, “It’s Whatever.” The track... QRunitup – Party City (Video)Qrunitup represents the borough of Brooklyn and has been trying to break through in the... Flykilangelo – “Voicemail” (Official Video)Huntsville, Alabama-by-way-of-Brooklyn recording artist Flykilangelo shows us he’s the real deal with the release of... Celebrity Designer and Owner of KlosetSlayer Marcia Arnsparger Santiago, Gives An Exclusive First Look into The Upcoming Swim Collection, Talks Summer Slay Giveaway, Upcoming NYC Fashion Week and Announces Celebrity Model Line UpBY: Kim Coco With 2021 New York City Fashion Week right around the corner and... Hip-Hop Star Gibrilville Wins Big At Akademia Music Awards 2021On May 5th 2021, the Akademia Music Awards Gala held, bestowing awards on artists who... Philly Artist Dre Stackz Releases New Empowered Visual “Black AmeriKKKa”Rising Philadelphia artist Dre Stackz has been writing music since he could put together words, and... Why Every Balochi Should Watch the Chiragh Baloch ShowChiragh Baloch is a YouTuber, web developer, artist, and musician who hosts a weekly show...
HHS87 Spotlight Saturday: Cico P has a New Project On The WayPeaking at #91 on Billboard’s Hot 100, “Tampa” was originally released in 2019 but began its swift climb... Zack Slime Fr Drops New Single Featuring SlimeLife Shawty, ‘Real Steppers’Zack Slime Fr is back today as he releases the visuals for “Real Steppers” featuring... DC The Don channels ‘The Sandlot’ in new pop-punk inspired videoIn hip-hop, it seems that more and more artists are releasing music inspired by one... ROME STREETZ & ANKHLEJOHN NEW VIDEO: “STOVETOP SERENADE”The deadly lyrical team-up of Brooklyn’s Rome Streetz & D.C.’s ANKHLEJOHN continues! New video for “Stovetop Serenade” has just... BRONX-BORN ARTIST RIICHYLEE RELEASES NEW SINGLE “TRUST”Bronx-born artist Riichylee releases his new offering “Trust,” which makes its arrival with an accompanying visual directed by Nimi Hendrix. Riichylee... Kalan.FrFr Gets Faded in MIA in “Pray” Video from TwoFr 2Kalan.FrFr is a unique figure in the L.A. rap scene, carving his own lane with his... FRENCH MONTANA returns with “FWMGAB” – video out now!Kicking off a new chapter today, GRAMMY® Award-nominated multi-platinum rapper, producer, and philanthropist French Montana returns with...
HHS87 Spotlight Saturday: Cico P has a New Project On The WayPeaking at #91 on Billboard’s Hot 100, “Tampa” was originally released in 2019 but began its swift climb... DJ G.O.D., Vedo, & Raw Youngin To Drop ‘Like I Can’ Remix First Day Of SummerMusicbox Recording Group’s executive producer DJ G.O.D. announced via instagram that he’ll be dropping the remix to ‘Like I... Naor Yazdan helps you push through with his new song “Extra” from his EP “Energy”To help you get through that last set, that last meeting, and that last obstacle  throughout... Interview With Brooklyn’s Own “Kitty Gata”WHERE ARE YOU FROM ? “Borough Park … BROOKLYN NY” WHAT DO YOU DO FOR... Farrari Yanni: The Rising Rap Enthusiast Taking Over Chicago AirwavesAs one of the hottest rappers in Chicago right now, Farrari Yanni is geared up to release... Tomi Thomas releases “Again” videoNigeria is definitely turning into a hub of new talent, which can be attributed to the... Trap Commander ‘Up Close & Personal” Interview with HipHopSince1987Tap Commander and DJ Alamo talk about being a leader in the game and how...