Is Nas a Gimmick Rapper 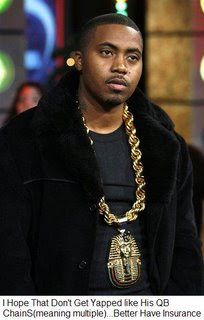 Is the 2nd best rapper ever (Biggie, Nas, Jay-Z,) a gimmick rapper.I hate to say it but im startin to feel this. Around a year ago Nas started his hip-hop is dead campaign and many agreed with it and it is part true. It was a dope album, but really lacked the creativity I expect from a Nas album. I just think it sounded rushed. It probably was because they probably realized they had to capitalize off the hype. This year the same thing seems to be happening. About a month ago Nas all of a sudden said his album coming in December but Def Jam was like they don’t have Nas on the release schedule. All of a sudden a week later the recently updated release schedule come out and Nas is on it and is naming his album Nigger. I personally don’t care about the name of the album. All together Im against the ban of nigger, nigga, or whatever. It has been used as a term of endearment for the past 40 something years and most people don’t even know the origin of the word. Heres an interesting article http://dallaspenn.com/weblog/?p=2031
Anyway is Nas a gimmick rapper? Think back the last Nas album with a real hype behind its release was I am and Nastradamus, and the latter was terrible. He fell out of the spotlight until Hov bought him back wit the diss, and that generated hype behind it. Nas next 2 releases Gods Son and Street Disciple were both dope to me but didnt really have hype behind them. Next thing he signs wit Def Jam and says Hip-Hop is dead, and now its a anticipated album. Now Nigger. Even though I like the music I’m tired of there being some controversy behind these releases. The record industry generally does that with every big release, (see 9/11/07) but I just don’t think Nas needs to do it. He is the 2nd greatest rapper ever imo. But anyway that was just some food for thought, you do the dishes.
Old cribs I sold, y’all drive by like monuments/Google Earth Nas, I got flats in other continents