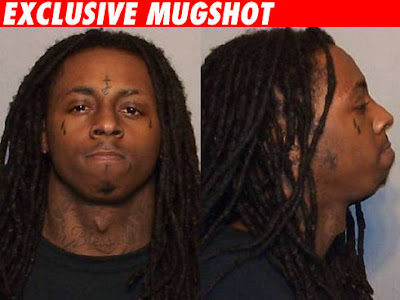 According to multiple sources, Lil Wayne (born Dwayne Carter Jr. ) has
had yet another run in with the law. Last night (Tuesday, January 22nd),
Wayne was arrested near Yuma, Arizona on three felony counts for
possession of dangerous drugs, possession of drug paraphernalia and
possession of narcotics.

Details are sketchy at this time but it seems that the tour bus Lil
Wayne was on was pulled over and searched by US Border Patrol, who
found narcotics on board. Border Patrol reportedly alerted the DEA and
Wayne was arrested. He is currently being held in custody by the Yuma
County Sheriff's Department. According to the Yuma Sun, Yuma County
Sheriff's spokesman Capt. Eben Bratcher said that Wayne was booked
into county jail at 6am by the DEA. His arraignment was scheduled for
9am PST and more details should surface shortly.

Lil Wayne ran into a similar incident last year for felony possession
of drugs in Idaho.