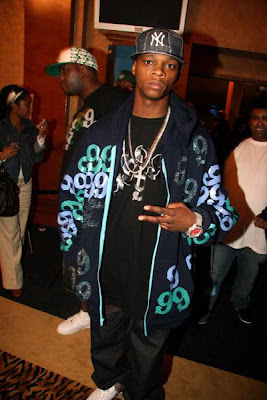 Despite recent rumors that have been spreading all over the net Papoose says that his engagement to rapper Remy Ma is false.

Although, he did not deny that the two do “share a friendship,” Papoose strictly went on record stating: “It’s not true. [We’re] friends.”

As previously reported, the assault trial for Remy is officially underway as jury selection began on March 6th in New York. Remy is facing assault and related charges for allegedly shooting a woman twice in the abdomen, last summer. Clearly shaken up from the thought of Remy’s situation, Papoose refused to comment on the trial.

In other news, there has been speculation that 50 Cent has expressed interest in signing Papoose to his G-Unit imprint. Neither confirming nor denying the courtship, the Brooklyn rapper did express his respect for Mr. Jackson’s empire.

“50 Cent is an incredible entrepreneur,” Papoose said. “He brings a lot to the table in hip-hop. What [G-Unit] put down in hip-hop, I don’t think nobody’s did in a long time. I respect them a lot. Tony Yayo, Lloyd Banks, the whole team. Those are my dudes over there. Who can’t respect what they’ve brought to the game? You got to be a damn fool not to or you’re just a hater. Them dudes are consistent man. That’s all I have to say about them.”

Although, Papoose did not reveal who he’s been in talks with, he stated that there are a few opportunities available.

With the ongoing war of words over the altercation between Papoose and Fat Joe, still raging on Papoose gave his latest assessment of the situation.

“One of the reasons why I think the reaction is so big is because I think a lot of people really dislike this dude,” Pap explains. “They’re tired of him trying to throw his weight around. If you listen to how he talks to a lot of the radio personalities, it’s just no respect. This rap sh*t really went to this dudes head, man,” he continues. “He really thinks that he’s above and that he’s bigger and badder than everybody, but he’s really the cowardly lion. It’s all a facade. And I think a lot of people are like finally someone put this dude in his place.”

Remy Ma Freestyles About Her Grammy Nominatons On Hot 97