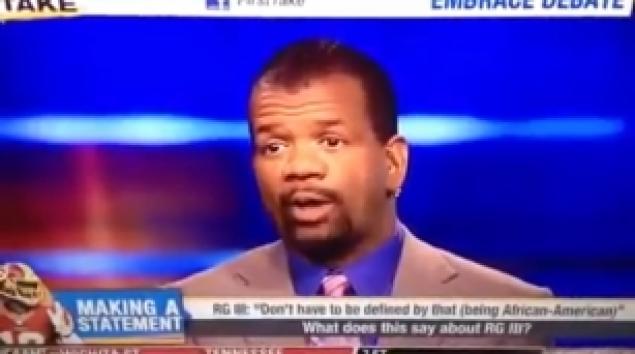 ESPN has suspended commentator Rob Parker for 30 days for comments he made about Washington Redskins quarterback Robert Griffin III during a Dec. 13 episode of “First Take.”

The suspension comes one day after Parker issued an apology on his Twitter account. On the show, he was discussing Griffin’s answer to a question about Griffin’s role as an African-American quarterback, and Parker questioned Griffin’s “blackness,” citing that the player has a white fiancée and is rumored to be Republican.

Among his comments, Parker, who is black, said: “Is he a brother or a cornball brother?”

In his apology, Parker said he reached out to Griffin’s agent with the hope of apologizing to Griffin directly.

“I blew it and I’m sincerely sorry,” Parker posted on Twitter. “I completely understand how the issue of race in sports is a sensitive one and needs to be handled with great care.”

“Our review of the preparation for the show and the re-air has established that mistakes both in judgment and communication were made,” said Marcia Keegan, vice president of production for ESPN who oversees “First Take.” “As a direct result, clearly inappropriate content was aired and then re-aired without editing. Both were errors on our part. To address this, we have enhanced the editorial oversight of the show and have taken appropriate disciplinary measures with the personnel responsible for these failures.